The first thing that we should notice is that those that talk about global warming can't go on for two sentences without mentioning greenhouse gasses or their effect. In order for us not to remain confused by their "big words", let us answer some questions.

What is the greenhouse effect?

Directly or indirectly, all of the energy that we use comes from the Sun, even the fossil fuels we use today simply represent Sun's energy stored long ago in plants (coal) and animals (oil). 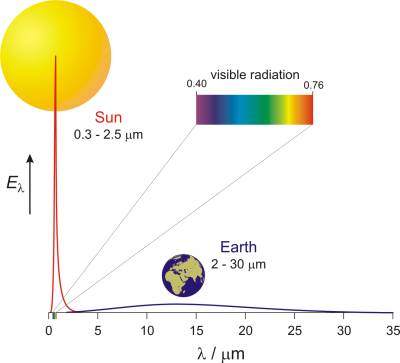 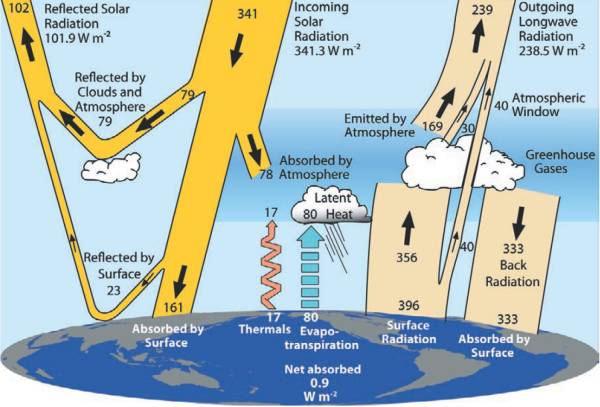 When Earth is this heated it radiates itself. However, since Earth is relatively cold (around 15 °C), and since the Sun obeys Planck's law, her radiation falls in the area of larger wave lengths, from 2 μm to 30 μm (infrared area). In Fig. 4 you can see the spectral density of the energy current, Eλ, incoming solar radiation and Earth's heat radiation in correlation with the wave length, λ.

CO2 molecules, when faced with incoming solar radiation act as a transparent body. However when faced with outgoing radiation from Earth they act almost as a black body. In other words, CO2 molecules are very good at letting through the visible spectrum of radiation originating from the Sun while almost completely blocking outgoing infrared radiation emitted from Earth, so it isn't able to pass through the atmosphere. The absorbed infrared radiation CO2 molecules emit partially towards higher layers in the atmosphere and partially back towards Earth. This returning infrared radiation helps keep relatively high temperatures on the surface of Earth. This is essentially the same process being employed in green houses hence the effect is named the greenhouse effect. The term "greenhouse effect" was coined in the 18th century by the French mathematician and physicist Jean-Baptiste Joseph Fourier (1768-1830). Thanks to the greenhouse effect the average yearly temperature of the Earth's surface was comfortable 15 °C (288 K) and without it the temperature would be drastically lower, -18 °C (255 K), whole 33 degrees lower.

Why the commotion around the greenhouse effect then?

Because, if the worst predictions come true, the global warming in the next century will lead to a rise of the ocean level and the melting of glaciers, the frequency of extreme weather events (bigger and stronger storms, waves, heats, floods ...) will also increase and due to the warmer environment there will be a massive outbreak of insects which will significantly endanger public health.

Some climatologists believe that if the global warming continues there will be a sudden meltdown of the Greenland ice cower which will lead to a temperature and salinity decline so large that the currents of the Atlantic ocean will stop, which will result in a flash freeze, or in other words a mini ice age.

And the only one to blame for all of this will be man and his uncontrollable release of the greenhouse gasses.

What are greenhouse gasses?

Carbon dioxide isn't the only one, nor is the most common or the most effective greenhouse gas. The others are water vapor (H2O), ozone (O3), methane (CH4), nitrogen(I) oxide and some purely synthetic gasses which aren't present in the nature: chlorofluorocarbons (CFCs), hydrofluorocarbons (HFCs), perfluorocarbons (PFCs), sulfur hexafluoride (SF6) - just to list the most important. However, their absorption spectrums sometimes overlap and when it comes to the greenhouse effect, two plus two doesn't always equal four. In order to remove all the CO2 from the atmosphere only 15 % less infrared radiation would be absorbed, and if CO2 was the only greenhouse gass he'd absorb only 26 % of the infrared radiation that is currently being absorbed in the atmosphere.

In Table 1 you can see estimated GWP values of some greenhouse gasses published in the fourth report on climate change published in 2007 by IPCC.

Which gas is the most responsible for the greenhouse effect?

You have to keep in mind that the effect of a specific greenhouse gas depends on it's life span in the atmosphere, that is the time needed for the observed gas to be removed from the atmosphere and pass in to another form (for example: CO2 turns in to biomass and O2 through photosynthesis) and of course, the amount of the specific gas in the atmosphere. The contribution of the most important greenhouse gasses to the greenhouse effect (on a cloudless sky) can be seen in Fig. 6. [19] 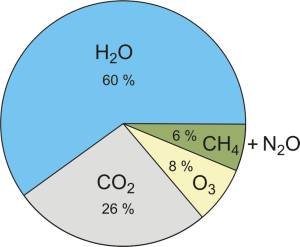 Carbon dioxide (CO2) is a natural part of the atmosphere and is in concentrations present in the atmosphere. It does not endanger our health and without it life on Earth would not be possible. It is common practice in greenhouses to enrich the atmosphere with CO2 which results in larger quantity and quality of produced vegetables. Increasing the concentration of CO2 above 1000 ppm nets a 40 % increase in productivity. Also, keep in mind that greenhouses are usually heated in order to have the optimal temperature for the plants to grow in. Why is then the increase of CO2 in the atmosphere harmful? [21, 22] 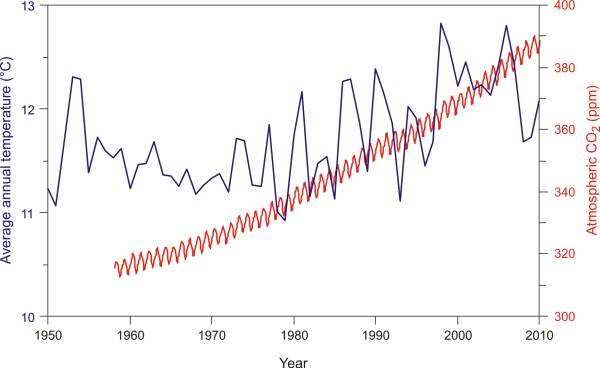 The main culprit for the constant increase in the quantity of CO2 in the atmosphere is the combustion of fossil fuels (in energetics, transport, manufacturing of cement etc.). Specific emission of individual product's combustion greatly depends on the type of fuel (look at Table 2 to see how it is in the energy prodiction). Just so you know, the stove you used this morning to cook your coffee uses up 2 kW/h. Notice that the emission of nitrogen oxides does not depend on the type of fuel - which is logical because its source is not the combustion of fuel but rather the combustion of air. Lowering their emissions can be done by constructing better fireplaces. The term NOx is used for a compound of NO and NO2 which develops at high temperatures in fireplaces during the combustion of fuel (the product is mostly NO but commonly, due to very rapid cooling of smoke gasses and with enough oxygen, significant amounts of NO2 develop.

The amount of CO2 created during transport is not insignificant either. According to the estimate of the international organization for the manufacturing of motorized vehicles (OICA, Organisation Internationale des Constructeurs d'Automobiles) in 2010 there were 77 609 901 newly produced vehicles. The exact number of cars on the roads is unknown - according to some estimates it ranges around 800 million. Try to calculate yourself how transport effects the rise of CO2 levels if you know that combusting one liter of gasoline uses up 1 200 L of oxygen (5 700 L of air) which creates 2.38 kg of CO2. An interesting thing is that only 5 % of the energy gained from fuel is used for the transport of the passenger from one place to another while the other 95 % is used to transport the vehicle itself. [25]

In Table 3 you can see 20 countries which emit 80 % of the world's CO2 emission. Miserable 158 thousand tons of CO2 more would have been enough for Poland to enter that exclusive club. [26]

Anthropogenic sources of methane and nitrogen oxides are usually linked to agriculture. According to a report published by the Food and agriculture organization (FAO) in November 2006 cattle farming are responsible for around 18 % of the total emission of greenhouse gasses (which is more than transport). [27]

Most people know N2O as the laughing gas, but in later years climatologists refer to it as the crying gas. The reason for this is that with the reduction of CFC it became the major cause for the destruction of the ozone layer. N2O is developed in the ground through the process of nitrification (bacteria transform NH3 in to NO3) and denitrification (other bacteria transform NO3 u N2). Emissions from processes related to human activity (around 70 % of which is agriculture) are constantly rising the levels of N2O in the atmosphere by around 1 % every four years. The estimate that natural sources of N2O are responsible for 64 % of the emissions is disputable because of the inability to prove if the nitrate in the waters is of natural or anthropogenic origin. [28]

By shrinking swamp surfaces (drying) natural methane sources (CH4) have been lowered to only 37 % of the total amount of CH4 being emitted in to the atmosphere each year. The main manufacturer of methane are the digestive systems of billions of animals which fart (release winds) and poo (release dung), grown to become food for the ever growing population of Earth.

Researchers have found out that by producing 1 kg of beef meat the amount of greenhouse gasses released is equivalent to 21.73 kg of CO2 (Table 4). [29]

When you eat a single hamburger (say for example a Big Mac weighing 214 g) your contribution to the concentration of greenhouse gasses is the equivalent of combusting 2 L of gasoline. However, if this information motivates you to eat milk for breakfast - in the interest of preserving the environment if not your own health, keep in mind that every milk-cow in the south of the USA produces around 6 700 kg of milk which as a byproduct produces 194 kg of methane (digestion 118 kg, dung 76 kg). This gives us a ratio of 1 kg of methane from digestive sources for each 34.5 kg of milk.

Do you remember the formula for the equivalent of carbon dioxide?

or about 2 kg CO2e per liter of milk.

But that is not all

Deforestation. Behind that word is hidden the greatest victim of man's blind stumbling forward, the forests. We use them in fireplaces for their energy, we poison them with acid rains from the same fireplaces, we cut and burn them to make way for the production of biofuels all the while continuing to calling them the "lungs of the Earth".

Water, CO2, minerals from the ground and Solar radiation are basic components from which plants, using photosynthesis, create compounds essential for life on Earth. It is estimated that the annual primary production of biomass, in the world's ocean and on land is 146 billion tons (only some 5 % of that comes from agriculture). How much CO2 is bound in forests? [30]

To calculate the amount of CO2 bound in plants we need to know a few things first. The combustion of tropical forest releases around 1.6 kg CO2 per kilogram of burnable biomass. Secondly, the amount of dry matter, or biomass, for a typical tropical forest is around 200 t/ha (20 000 t/km2). Deforestation's effect on the increase of CO2 is twofold; on one side the number of trees that bind CO2 is reduced and on the other side extra CO2 is released by their destruction. [31, 32]

The Amazonian rain forests are being destroyed with extreme speed in order to make way for pastures and fields for the cultivation of soy, the main cattle food and raw material for the manufacturing of biodiesel. Brazil, in only ten years, doubled the amount of land cowered by soy: in 2000 from 13.6 million hectares 34.7 million tons of soy was gathered and in 2010 the surface increased to 23.5 million hectares (mostly stolen from the Amazonian rain forest) which produced 69 million tons of soy. [33]

Do not forget that the forests, aside from raw material for the wood industry and as a source of energy contain some other useful functions. Forests filter and clean the air, hold water, prevent erosion of land, lower the strength of the wind and are homes for many plants and animals. Forests also produce oxygen, and I do not think I need to explain why oxygen is useful. However, the allotropic modification of oxygen, ozone, is another story.