THE OZONE LAYER IS NOT A SHIELD,
IT IS THE REMNANT OF UV RADIATION PROTECTION

Abstract: Everybody says that the Earth's ozone layer protects life from the Sun's harmful radiation, but that is not true. Ozone does not have a shield that reflects ultraviolet radiation - it sacrifices itself for our protection. No matter how thick the ozone layer is it will simply disappear when illuminated. In order for the surface to be protected, an amount of ozone equal to the amount of UV-B photons in a ray of light needs to be created. The amount of ozone on the photon's path will depend primarily on the amount of oxygen atoms created by light. Photodissociation of oxygen molecules is the driving force of this cycle. The warmer the Sun, i.e. the more photons that are being produced with a wavelength smaller than 240 nm, the better the surface of the Earth is protected from UV radiation. The ozone layer represents a "negative image" in terms of UV radiation protection. It is comprised of ozone molecules that UV photons did not hit and those that were not dissociated even though they were hit. Both events depend only on their probability to occur.

"The English physicist Sidney Chapman formulated in 1930 the first photochemical theory for the formation and decomposition of ozone in the atmosphere. This theory, which describes how sunlight converts the various forms of oxygen from one to another, explains why the highest contents of ozone occur in the layer between 15 and 50 km, termed the ozone layer. Later measurements, however, showed appreciable deviations from Chapman's theory. The calculated ozone contents were considerably higher than the observed ones. Thus, there must be other chemical reactions contributing to the reduction of the ozone content. Some years later the Belgian Marcel Nicolet contributed important knowledge of how the decomposition of ozone was enhanced by the presence of the hydrogen radicals OH and HO2.

The scientist to take the next fundamental step towards a deeper understanding of the chemistry of the ozone layer was Paul Crutzen. In 1970 he showed that the nitrogen oxides NO and NO2 react catalytically (without themselves being consumed) with ozone, thus accelerating the rate of reduction of the ozone content.

The next leap in our knowledge of ozone chemistry was in 1974, when Mario Molina and Sherwood Rowland ..."[1]

We will end the story about the development of atmospheric chemistry here. In order to simplify things we will go a few centuries into the past, to the pre-industrial era. Then, as it does today, the atmosphere protected the surface from UV radiation, but humanity's impact on it was minimal. We will also change our viewpoint. Instead of looking at the atmosphere and its processes from the perspective of a man from the surface, we will look at the fate of a photon coming from the Sun towards the Earth.

In this paper we will attempt to explain in a very simple fashion how the atmosphere protects the surface, what exactly helps it and what works against it. We will use Atkins Physical Chemistry as a reference literature. Let's start with the Champan's model from page 922.[2]

The Chapman model accounts for ozone formation and destruction in an atmosphere that contains only O2:

Life cycle of an oxygen atom

Given that the chemistry of the mesosphere and the stratosphere is dominated by reactions involving oxygen atoms we modified the Chapman's model so that it better suits the conversion paths of oxygen atoms. The propagation step in the Chapman's cycle is replaced with two new steps, consumption and photochemical regeneration. A scheme of this cycle is presented in Fig. 1. 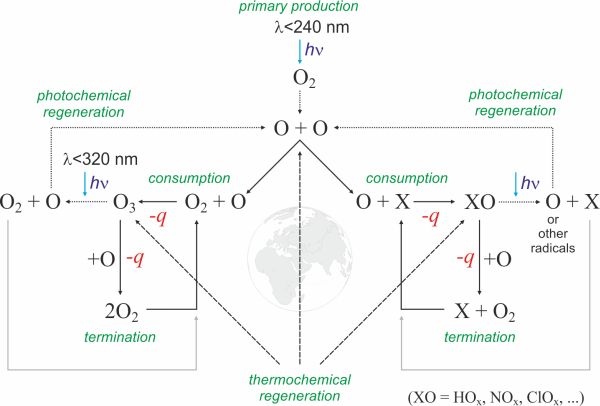 Figure 1. The life cycle of an oxygen atom. The left side of the cycle represents the Chapman cycle while the right side has oxygen reactions with all other constituents of the atmosphere. The image does not show reactions, only the conversion paths of oxygen atoms. The symbol hν represents the energy of the absorbed photon and -q represents the heat released by the chemical reaction. → Download high quality image

The life cycle of an oxygen atom can be separated into several steps.

1. Primary production
This is the driving force of the cycle. Photons with a wavelength smaller than 240 nm split the oxygen molecule resulting in two reactive oxygen atoms. As long as the Sun's light is shining on the atmosphere new oxygen atoms are pumped into the cycle. The dissociation of oxygen molecules which produces atomic oxygen is an endothermic reaction since this reaction requires the energy of UV photons.
2. Consumption
Oxygen atoms react with the constituents of the atmosphere creating either targets for incoming photons or new radicals. The ozone cycle is shown separately only due to its importance. Reactions in which stable compounds are created or compounds that cannot be photolysed are not a part of this cycle. The reactions of atomic oxygen with other molecules are exothermic since they give off energy.
3. Photochemical regeneration
Products created through reactions with oxygen atoms automatically become targets for a new stream of photons. Through their photolysis a single oxygen atom returns to the cycle. The minimum photon wavelength for photolysis depends on the resulting compound - for the photolysis of ozone it is 320 nm. These reactions are endothermic and need energy from photons.
4. Termination
Reacting primarily with ozone and nitrogen oxides as well as some other compounds (among which are man-made chemicals) oxygen atoms convert into molecular oxygen and leave the cycle. The termination of oxygen atoms must equal primary production in order to maintain balance of the system. The process of termination (unless it is of photochemical nature) also releases heat.
5. Thermochemical reactions
Thermochemical reactions do not contribute heavily to the daily production of oxygen atoms but they are responsible for the relaxation of the atmosphere during night time. The same goes for thermochemical regeneration and termination of ozone.

How does the Sun affect this cycle?

All photons that begin this cycle originate from the Sun. For our purposes, a good approximation of the solar spectrum is that of a black-body with a surface temperature of approximately 5778 K.[3] Using the well-known Planck's derivation of the distribution law for black-body radiation, in which k is Boltzmann's constant, (Atkins, p.295)

and the energy of a photon, E = λ/hc, we have calculated the distribution of photons Np as a function of wavelength λ. In order to illustrate how the distributions of energy in an UV range changes we did the same calculations with the assumption that the Sun is now 100 K warmer or colder. The results are shown in Fig. 2. It is evident from the image that with the rise of temperature the slopes of the curves become steeper as the temperature increases, or in other words, the temperature change of the black-body does not affect all photons equally.[4] 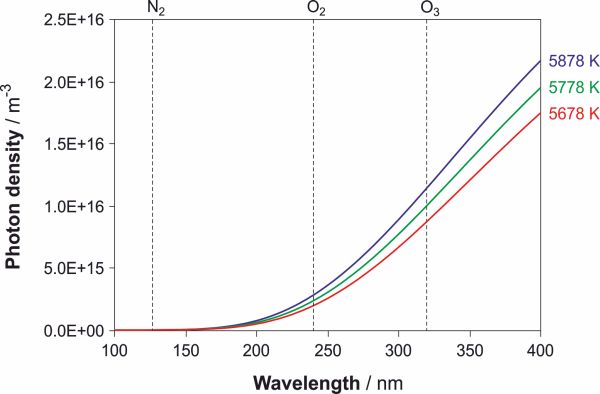 Figure 2. Spectral photon density at different temperatures. Distribution of photons as a function of wavelength in the UV range (from 100 nm to 400 nm) which is being irradiated by a black-body heated to 5678 K, 5778 K and 5878 K, respectively. For the same temperature change the change in slope of the curve is greater for the warmer body. → Download high quality image

The ratio of UV-C to UV-B radiation in the solar spectrum is not 1:1. If we present in table form the relations between photons which in the Chapman's model can photodissociate an oxygen molecule (UV-C) and those that can do the same with ozone (UV-B) we would notice something interesting. Even if all photons with a wavelength smaller than 240 nm got spent splitting oxygen molecules, and even if all resulting oxygen molecules gave an ozone molecule each, there would still be 2.8 times more photons in UV-B radiation than there are ozone molecules that can absorb them.

Observing only photons that have started their journey from the Sun we can conclude that:

Part II: The ozone layer is not a shield, it is the remnant of UV radiation protection

Generalic, Eni. "Part I: The ozone layer is not a shield, it is the remnant of UV radiation protection." EniG. Periodic Table of the Elements. KTF-Split, 14 Jan. 2023. Web. {Date of access}. <https://www.periodni.com/ozone_layer_is_not_a_shield.html>.