The name Système International d'Unités, (International System of Units) and the abbreviation SI, were established by the 11th General Conference on Weights and Measures (CGPM) in 1960.

The base quantities used in the SI are length, mass, time, electric current, thermodynamic temperature, amount of substance, and luminous intensity. The base quantities are by convention assumed to be independent. The corresponding base units of the SI were chosen by the CGPM to be the metre, the kilogram, the second, the ampere, the kelvin, the mole, and the candela. The derived units of the SI are then formed as products of powers of the base units, according to the algebraic relations that define the corresponding derived quantities in terms of the base quantities. When the product of powers includes no numerical factor other than one, the derived units are called coherent derived units. 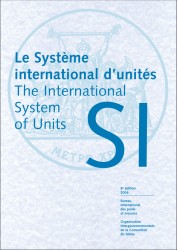 Coherent derived units in the SI with special names and symbols

Non-SI units associated with the CGS system of units

Names and symbols for decimal multiples and submultiples of the unit of mass are formed by attaching prefix names to the unit name 'gram', and prefix symbols to the unit symbol 'g'.