STORY OF OZONE AND OZONE HOLES

Apart from acting as a greenhouse gas ozone also acts as a strong oxidant that has a proven harmful effect on crops, the growth of forests and human health. It is constantly being produced and destroyed in the atmosphere through the effect of sunlight, electrical discharges and chemical reactions. Increased concentrations of ozone are typical for urban areas with dense car traffic and a strong industry: ozone is the main ingredient of the (photochemical) smog. [34]

Under the light of the Sun's reflector

Luckily only 10 % of the total amount of ozone present in the atmosphere is found in the troposphere - the part of the atmosphere where we move, work and breath. The rest is found in the stratosphere which is found 10-15°km from the surface (depending on geographical width). Unlike the troposphere in the stratosphere the temperature rises with altitude and stratospheric days are always sunny and calm, without a breath of wind, ideal for piloting a plane. The stratospheric ozone is the "good" ozone that guards life on Earth by absorbing harmful ultraviolet radiation (UV) which comes from the Sun. If you did not know, spores, bacteria, mold, and even viruses are destroyed by UV radiation (UV-C is the name of a germicidal and antimicrobial radiation). The shorter the wavelength the more dangerous the radiation it is.

If you concluded from the story that ozone absorbs the UV radiation in its entirety, you would be wrong. Ozone absorbs less than 20 % of UV radiation while the rest, and the most dangerous parts, are absorbed by oxygen and nitrogen (simply because there is a lot more of them in the air). We have divided UV radiation in to 3 areas according to its influence on human health and the environment: [35]

dangerous radiation that can cause skin cancer. Most of this radiation gets absorbed by ozone (wave lengths from 200 nm to 300 nm).

the least harmful but can still contribute to skin aging, DNA damage and skin cancer. No one in the atmosphere has any interest in absorbing this radiation so 99 % of UV radiation that reaches the Earth is UV-A.

A hole in the curtain

It was in 1985 - after the British scientists from the Antarctic station Halley Bay announced that the amount of ozone in the stratosphere is dropping (and "ozone holes" are being formed), that humanity was for the first time aware of the fact they are sawing off the branch they are sitting on. The world's science, industry and politics united to find a solution and came to an agreement to stop using chlorofluorocarbons (CFC, different freons used for cooling), methyl bromide (speeds up fruit growth) and similar products that they found responsible for the destruction of the "good" ozone (grades based on the work of the Dutch chemist Paul Crutzen from 1969 and the American chemist Maria Moline and Frank Sherwood Rowland from 1974). The usage of these chemicals was reduced with years but the ozone hole was not. Why is the ozone hole not shrinking?

As per usual, there are several explanations that go from the inertion of the atmosphere and stability of CFC compounds to the discovery of new compounds that are "drilling holes" in the ozone layer. However, let us not simply re-tell someone else's story; let us write our own which will illustrate the processes that happen in the stratosphere. Keep in mind, atmospheric chemistry is very complex and this model will not explain all of the processes that happen in it, but that is not its goal anyway. [36, 37]

To start, let us take a simple model of the atmosphere made out of only oxygen and nitrogen (they make over 99 % of the atmosphere anyway). What are the conditions in the stratosphere? The temperature increases with altitude (from -80 °C to 0 °C) and density drops exponentially (air concentration drops from 10-3 mol dm-3 to 10-5 mol dm-3). The day is beautiful and sunny. Water vapor is only found in traces. Fig. 8 shows how (at temperate geographical latitudes) the contents and temperature of the atmosphere change with altitude. [38]

While you are studying the figure, let us remind ourselves some basic chemistry. You already know that the speed of chemical reactions depends on the amount of collisions between molecules (atoms or ions), and that each collision does not result in a product being formed. Only those particles that have the energy equal or greater to the activation energy (Ea) can react through collision. [39]

In diluted and cold air of the stratosphere the kinetic energy of molecules is small so we can assume that the main catalyst of all reactions is sunlight. To find out which part of sunlight powers our reactions we need to know the binding energy for our two main parts of the atmosphere, nitrogen (78.084 %) and oxygen (20.948 %):

Only photons with wave lengths under 241 nm (127 nm) have enough energy to break the molecular bindings of oxygen (nitrogen). If you were following what is said in this text you are now aware that only UV-C radiation has enough energy to do the job. Oxygen atoms, and especially nitrogen atoms, really hate to be alone.

The appearance and disappearance of actors from the scene

Now that we have these highly relevant atoms of nitrogen (N) and oxygen (O) created through photolysis we will allow chemical reactions to happen. When these atoms scatter around in the stratosphere looking for who to connect with, it is most likely it will be with nitrogen (N2) and oxygen (O2) molecules as 99 out of 100 encounters is with them.

In the right part of Fig. 8 you can follow the change in the contents of the air in respect to the altitude, that is, the density of the atmosphere (do not forget that the volume fraction is written in the logarithmic scale - each dash indicates ten times less concentration). As we go lower and lower through the stratosphere, the density and non transparency of the atmosphere grow - light has more and more particles to hit (but has less and less high-energy photons in it).

Earth's atmosphere has been in a state of balance for several million years so it would be wise if our atmospheric model was also balanced. Now, since this is only an illustration, we will ignore some reactions and leave photons to keep breaking bonds they encounter (if they have the energy for it) and we will highlight only two parts of the figure that affect the reduction in the amount of ozone.

but also in collisions with oxygen atoms.

Alongside that, with the increase of density, "non productive" collisions are more and more common which as a result lowers the concentration of oxygen atoms

The reduction in the amount of free oxygen atoms leads to a lower production of ozone. A part of the atmosphere (from 15 km till 30 km - depending on geographic length and time of year) where most of the ozone is located is called the ozone layer. The maximal concentration of ozone is at altitudes of around 20 km (also depending on geographic length and time of year), after which it steeply drops. Notice that only nitrogen dioxide has a positive growth trend in all layers of the stratosphere.

Viewer contribution to the show

Let us allow a single powerful anthropogenic nitrogen dioxides source to enter our model. In order to avoid bad weather in the troposphere and save fuel, commercial airplanes can fly above 10 km at which point their engines emit all their combustion gases directly in to the stratosphere (or leave them on its doorstep). How our famous NOx couple (NO + NO2) affects ozone you can see in the previous chapter, and what other, known and unknown compounds can do to the stratosphere, we can see in a more detailed model. Fig. 9 shows the relationship between the increase of air traffic and the shrinking of the ozone layer. [40] 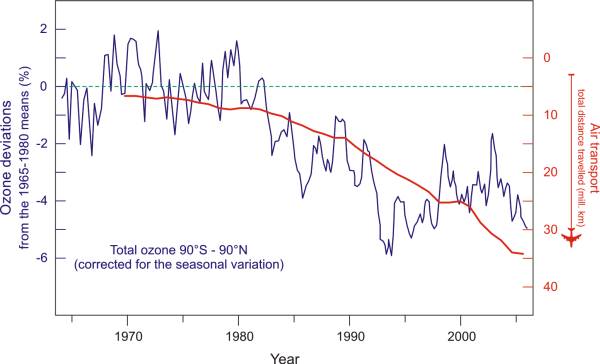 Fig. 9. A possible connection between the increase in air traffic and the shrinking of the ozone layer. (Air Transport Association, 2011; WMO, 2011). → Download high quality image

Exercise caution as statistics can easily be manipulated. I could have achieved the same result by comparing the production of plastic spoons or carton boxes with the shrinking of the ozone layer. The fact is that air traffic, plastic spoons and carton boxes are all linked with the growth of industrial production in general. As unlikely as it seems, and as much as I like it, this model proves nothing. The purpose of each model is to establish a hypothesis which can (and must) be proven. And each result from a tested hypothesis, be it a positive or negative one, will increase our knowledge about the system we are modeling. However, as Occamms razor says, the easiest and simplest explanation is usually the right one, so let us keep our model for now.

If you search around on the Internet you will quickly find data (from airlines) that claim that airplanes have little effect on the climate because per passenger and kilometers traveled they use as much as cars. However, it is well known that commercial airplanes operate on slightly higher altitudes than cars, and air flows in such high altitudes (10-12 km) are not nearly as lively as those in the troposphere. We can test the influence of an airplane to the chemistry of the stratosphere if for example we take a two engine Airbus A330-300 airplane known as the "green" airplane whose flight range is 10 800 km and whose reservoir volume is 97 530 L - it would be more than 9 L of fuel per kilometer (a larger four engine A340-500 uses almost 13 L/km). You can see the amount of kilometers traveled for various airplanes of the world in Fig. 9. [41]

So we can conclude that the effect of ozone depends on how far away we are from it, it poisons us in the cities (photochemical smog), it heats us in the troposphere (greenhouse gas) and protects us in the stratosphere (ozone layer).

Wops, I think I went a bit too high, it would be best if I got out of the ozone hole and went back on Earth where preparations for a great battle are in progress.