HISTORY OF THE RARE EARTH ELEMENTS

The history of rare earth minerals begins in the year 1751, when the Swedish mineralogist and chemist Axel Fredrik Cronstedt (1722-1765) described an unusually heavy, reddish mineral (later named cerite) which he had found in the quarry of Bastnäs, near Eyddarhyttan, Sweden. The famous Swedish chemist Carl Wilhelm Scheele (1742-1786) analyzed it and came to the conclusion that it was only an iron aluminum silicate and the mineral was more or less forgotten for next five decades.

In 1787, the story continued when a Swedish chemist Lieutenant Carl Axel Arrhenius (1757-1824) found an interesting, very dense black mineral which he named ytterbite in a small feldspar and quartz mine near the village of Ytterby, Sweden. The first scientific description of the mineral was performed by Swedish mineralogist Bengt Reinhold Geijer (1758-1851) who speculated that the mineral might contain the recently discovered element tungsten.

The complex compositions of the two starting minerals cerite and gadolinite (ytterbite) are revealed in the flow chart of discoveries of the elements (Figure 3). Whilst then cerite was the first of the rare earth minerals to be discovered, it was in ytterbite, (later renamed gadolinite) that new elements were first recognized, and the chemistry of the rare earths began in 1794 with Gadolin's observation. 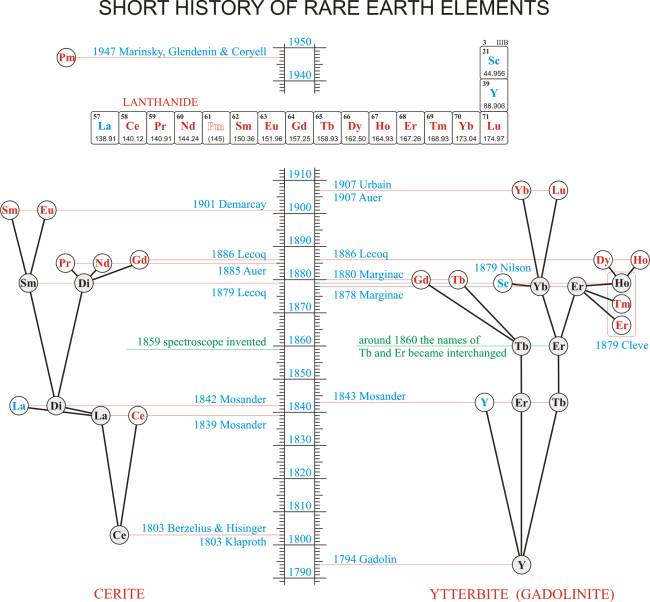 Figure 3. 150 years of rare earths history. The complex compositions of the two starting minerals cerite and gadolinite (ytterbite) are revealed in the flow chart of discoveries of the elements. → Download high quality image

The Finnish chemist Johan Gadolin (1760-1852), while examining an Arrhenius' rock, was able to show that the new mineral contained 23 % silicon dioxide, 4.5 % beryllium oxide, 16.5 % iron oxide, and about 55.5 % of a new oxide he called ytterbia. Three years later the Swedish chemist and mineralogist Anders Gustaf Ekeberg (1767-1813) had confirmed Gadolin's analysis and he shortened the name ytterbia to yttria.

The early Greeks defined earths as materials that could not be changed further by the sources of heat then available. This Greek conception remained strong in chemistry, and oxides of metals such as calcium, aluminum, and magnesium were known as earths and were thought to be elements. Not until 1808 did the English chemist Sir Humphry Davy (1778-1829) demonstrate that the earths as a class were not elements themselves but were compounds of oxygen and metallic elements.

After discovery of yttria, the chemists looked closely at Cronstedt's 'heavy stone from Bastanäs'. In 1803, the Swedish ironmaster and scientist Wilhelm Hisinger (1766-1852) together with the young chemist Jöns Jakob Berzelius (1779-1848) analyzed a sample of the 'tungsten (heavy stone) of Bastanäs', and isolated an earth similar to yttria but recognized it was distinct. The Swedish chemists named new earth ceria, from the asteroid Ceres, discovered two years previous, in 1801, between Mars and Jupiter by the Italian monk and astronomer Guiseppe Piazza (1746-1826).

At the same time and independently of Hisinger and Berzelius the German chemist Martin Klaproth (1743-1817) also analyzed tungsten from Bastanäs and come to the same conclusion: it contained a new element which he called ochroite (from the Greek ochra meaning yellow brown) due to the light brown color of the pure substance. Hisinger, Berzelius and Klaproth are usually named as co-discovers of cerium.

But no one was aware that new elements are like a Russian matryoshka dolls (Figure 4). Then, in 1839, Berzelius' student, the Swedish chemist Carl Gustav Mosander (1797-1858) separated ceria into pure ceria and an earth which he named lanthana (from the Greek word lanthanein, to lie hidden, because it lay hidden in the mineral cerite for 36 years after ceria was discovered in 1803). In 1842 he showed that lanthana contained another earth, which he called didymia (from the Greek didymos meaning twins because it closely resembled lanthana). 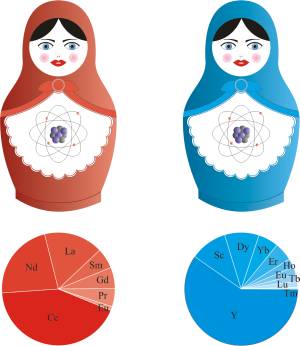 Next year, Mosander took 'yttria matryoshka' into his own hands. He separated yttria into three fractions: the first one, an oxide with a yellow color, he named erbia, the second one with a rosy color he named terbia, and the final fraction, a colorless oxide he continued to call yttria. Given that he separated the two new earths from yttria, Mosander derived the names of terbia and erbia from the name of the village Ytterby.

However, in the confusion arising from the similarity in the properties of the rare-earth elements, the names of two, terbium and erbium, became interchanged (around 1860).

After Mossander's work, other chemists attempted to isolate other rare earths, but there were proved to be a hard nut to crack. It was not until the invention of the spectroscope by the German chemist Robert Wilhelm Bunsen (1811-1899) and physicist Gustav Robert Kirchhoff (1824-1887) in 1859 and the development of spectral analysis that the tools for studying rare earths were finally provided.

In 1878 the Swiss chemist Jean-Charles Galissard de Marignac (1817-1894) finally split one of the 'rare earth matryoshkas' triggering an avalanche of discoveries. He showed that Mosander's terbia, now erbia, could be separated into two earths: the rose-colored earth he continued to call erbia and the colorless one he named ytterbia.

Note: This small village on the Swedish island of Resarö, in the Stockholm archipelago is now celebrated in the names of no less than four elements: yttrium (Y), terbium (Tb), erbium (Er), and ytterbium (Yb).

This erbia was, however, still not a pure oxide. In the following year the Swedish chemist Per Theodor Cleve (1840-1905) split erbia into a purified erbia and two new earths: the brownish precipitate he named holmia (the Latin name of his native city Stockholm) and the greenish one he named thulia (after Thule, the old name for Scandinavia).

One of these new earths was also impure and, in 1886, the French chemist Paul-Émile Lecoq de Boisbaudran (1838-1912) separated a new oxide from holmia, which he named dysprosia (according Greek verb dysprositos, hard to get at).

In 1879, during a routine procedure for isolating very pure ytterbia (ytterbium oxide, Yb2O3) from the rare-earth mineral euxenite the Swedish chemist Lars Fredrik Nilson (1840-1899) found traces of an unknown earth which he named scandia (this time after the Latin name for Scandinavia, Scandia).

In 1880 Galissard de Marignac discovered that one fraction of gadolinite, known as terbia, contained a previously unknown element which he tentatively called Yα. Six years later, in 1886, de Boisbaudran separated a pure form of the earth Yα from Mosander's didymia. Boisbaudran proposed and Marignac agreed to rename Yα to gadolinium after the mineral in which it was found.

Finally in 1907, the French chemist Georges Urbain (1872-1938) and the Austrian chemist and engineer Carl Auer (1858-1929), who later became Baron von Welsbach, independently demonstrated that ytterbia contains one more oxide. Urbain's designation of the new element as lutecium, after the ancient name for his native city, Paris, was accepted by most, although Auer's name cassiopium, after the constellation Cassiopeia, was used in German-speaking countries for many years.

On the other hand, 'ceria matryoshka' revealed even more hidden dolls within. In 1879, during analysis of the mineral samarskite, Boisbaudran found that ammonium hydroxide has caused a new precipitate to form before the dydimia formation. He called the new earth samaria according to its mineral source.

Note: Mineral samarskite was named after the Russian mining engineer, Colonel Vasilij Evgrafovič Samarskij-Byhovec (1803-1870) who supported the development of geology and mining in the Ural mountains. This rather unknown person was the first person by which one chemical element is named.

In 1885 von Welsbach succeeds to separate new didymia into two new earths which he named praesodymia (green didymia its leek-green salts) and neodymia (new didymia), breaking the tradition of keeping the old name. So, after 40 years of being known as the element with the symbol Di, didymium was removed from the periodic table.

Further spectroscopic analysis in 1886 of samaria by the French chemist Eugène-Anatole Demarçay (1852-1904) yielded new spectroscopic lines which were indicating an unknown element. Five years later, Demarçay had improved his separation technique that enabled him to isolate some suitably pure samples of the new colorless earth, closely associated with samaria, which he named europium.

When the British physicist Henry Gwyn Jeffreys Moseley (1887-1915) developed the present-day scheme for assigning atomic numbers to the elements in 1912, it became apparent that one rare earth metal was missing between neodymium and samarium. During the years several groups claimed to have produced the element 61, but they could not confirm their discoveries because of the difficulty of separating it from other elements. The isolation and identification of element 61 was finally made in 1947 by the American chemists Jacob Akiba Marinsky (1918-2005), Lawrence Elgin Glendenin (1918-2008), and Charles DuBois Coryell (1912-1971) from the fission products of uranium fuel irradiated in a nuclear reactor at Oak Ridge, USA. The element promethium was appropriately named after the Prometheus, son of Iapetus, who stole fire from Zeus' lightning and brought it to humans, because it was created in the one of first atomic fires lighted by human hand.